It was a journey a long time ago for me. Wilderness completely surrounded me for hundreds of miles. Sitting on a lichen-covered rock outcrop overlooking the flowing water of a creek, I was in heaven watching a pair of Otters play in the rapids. Ok, in actual fact, I was really enjoying watching these animals, while simultaneously trying to kill several Deer Flies that wouldn’t stop trying to suck my blood!

Moose sleuthed all around me in the rugged landscape of Georgian Bay in the early 1990s. Not long ago, they used to freely strut their stuff in what is now Toronto. Photo by Dr. Martyn Obbard.

All of a sudden, nearby screaming in the opposite direction sent chills down the back of my neck. The Otters scattered. Snapshots of Ravens through the canopy of oaks and maples dappled the sunlight even further, a the shiny black birds scattered the scene.

The screeching stopped as the animal raced through over-sized ferns towards me. I could just see a tall, brown tail shredding the plants as it neared. At the last second before impact, the animal skidded abruptly to a stop. We were face to face for a seemingly long time. It was a Fisher. I was a Human (and still am). In that moment, the small but feisty carnivorous mammal and me stared wide-eyed into each other’s core as one being. It left me with a deep picture of all things. It felt like a miracle view into the connectedness of the rocks, the river, the trees, and animals sharing it all. It was a miracle that likely exists in every moment if only viewed with the proper lens. It was also the kind of experience that deep, widespread nature affords.

It was only a few days earlier that I sat quietly picking Wild Blueberries on the edge of a patch of Sphagnum moss when an Eastern Wolf trotted by with a bear’s paw clutched gently in her mouth.

On the road to Georgian Bay, there are many stops in central Ontario that will take your breath away.  Southern Ontario still has a few gems in Carolinian Canada, but we’ve lost thousands of wild treasures that we don’t even know about.

This happened about 25 years ago, in central Ontario’s much celebrated eastern Georgian Bay region, a place that has always had a wild side to it, thanks to the rugged rocky and twisting wetland terrain. While there certainly are development pressures on this landscape, I’m so grateful that in my absence all these years, I know Georgian Bay and all its wildness is still there and likely will be for a long time. It is truly a landscape populated with signature animals that both keep you on your toes, and inspire you deeply at the same time. 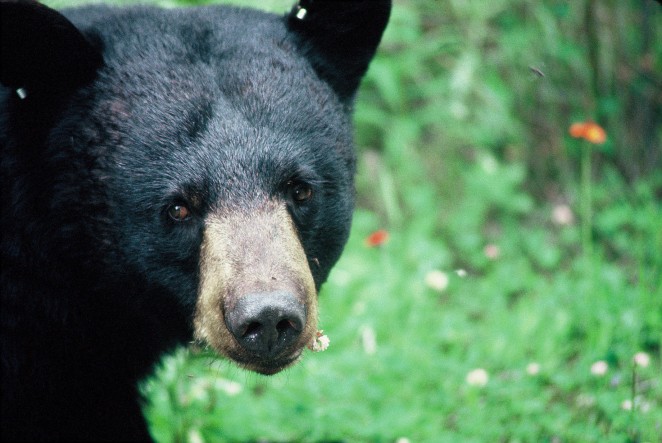 Face to face (face to zoom lense?) with a Black Bear. Photo by Dr. Martyn Obbard.

While Georgian Bay is a biologically diverse, vast, and blanketed by a high percentage of land with habitat (over 75%), it doesn’t hold a candle in comparison to the diversity found in Southern Ontario’s Ecoregion 7E. This is the region defined by a trapezoid shaped area covering the landscape from Windsor to Sarnia to London to Toronto and over to Niagara Falls; it is dubbed Carolinian Canada. It’s just about the size of Switzerland. Most of the Carolinian Life Zone’s natural cover has been removed – only 18% of habitat remains in comparison. Even with most of its habitat denuded, it is the richest place in the country for plant and animal diversity, and the dubious winner of the longest list of Species at Risk.

Fishers are few and far between in Carolinian Canada, as are many other larger species that need big tracks of habitat – like Moose, Bears, and Wolves (these three are all fully absent). Maybe 50,000 people live in eastern Georgian Bay, from Midland to Parry Sound. In staggering contrast, about a quarter of the country’s population, or 7 million people, live in Carolinian Life Zone. Similarly, roads are densely webbed in the south, vs. the north that affords much bigger tracts, largely without asphalt and automobiles.

While a few parks are found in The Carolinian Zone, 95% of the lands are privately owned. Georgian Bay and other more northerly areas have is large tracts of publicly owned lands either in Parks or government owned Crown lands.

All of this begs a few key questions; how can we recover nature so that Ontario’s diverse south can provide these types of ‘deep nature’ experiences that inspire, rejuvenate and offer a health-inducing natural landscape? How can we recover rare habitats and missing species in this critical zone when it is largely owned by urban residents in cities and towns, and large farm operations in the countryside? Further, with nature literacy at an all time low, how do we get people familiar with the language and raw experiences of nature? And so, in consideration of all of this, can we ever get back to a largely wild landscape in southern Ontario?

The road to get there won’t be simple, but my five second rule answer (from the guy, not the head) tells me ‘yes’ – we can – get a lot of it back. But as a society, do we really want bears, moose, and wolves in a mix of what may be 10 or 12 million people in the next few decades?

It’s possible, but likely not, at least in the next few decades. This may be sad to some, but a major shift of perception in land sharing mentality would have to have been established. Moose aren’t teddy bears. Bears aren’t always as friendly as Elliott Moose. Cougars don’t always respond without retaliation to intense human encroachment. Cities likely won’t get smaller. Very few roads will be closed, or diverted.

But – there is room for renewed hope. While ecological literacy is low, education on climate change is really increasing. Many people now about the benefits of conservation. And after being an advocate for native plants for some time, it’s plain to see how people are resonating with the message of rebuilding nature, one native plant at a time. Thus, it is more than possible to foresee a future in which the cover in Carolinian Canada moves form 18 to 25% in the next few decades.

Whether this means we get our large predators and keystone species like bears and moose or not, it does mean at least our grandchildren will relish in the return of many smaller species. In the context of Carolinian Canada, this is really encouraging and dramatically exciting. There are many small species that dazzle and inspire.

How will we get there? It actually feels like we are moving into a new renaissance of ecological recovery. In recent years, we’ve seen the resurgence of Badgers in and around Long Point and in Brant County. We all watched Southern Flying Squirrels repopulate a tiny national park just outside of Windsor. A pond I observed being hand-dug in the middle of a barren farm field by high school students in the year 2000 quickly turned into one of the top breeding sites for Smallmouth Salamanders (Ambystoma texanum) in all of Canada. The salamanders were not introduced; they found the site on their own.

The Smallmouth Salamander; Endangered. They recently moved into a pond constructed by high school students in 2000.

It might not be a bear or a cougar, but it certainly could soon be a Fisher spotted moving along the edge of a creek in a city’s Environmentally Significant Area. The experience of nature back in our midst is real and happening today, piece by piece in Southern Ontario. Yes, it won’t be as rugged and wild as Georgian Bay for quite some time if ever. But if you’re here, certainly feel free to join the tide, and watch the swell grow as we bring back more and more animals, one experience at a time. And for your own good, and that of the people around you, find a relatively quiet spot nearby and sit there regularly. You’ll be amazed at what you experience in solitude in nature and how you will start to wear this calmness and groundedness with you throughout each day. 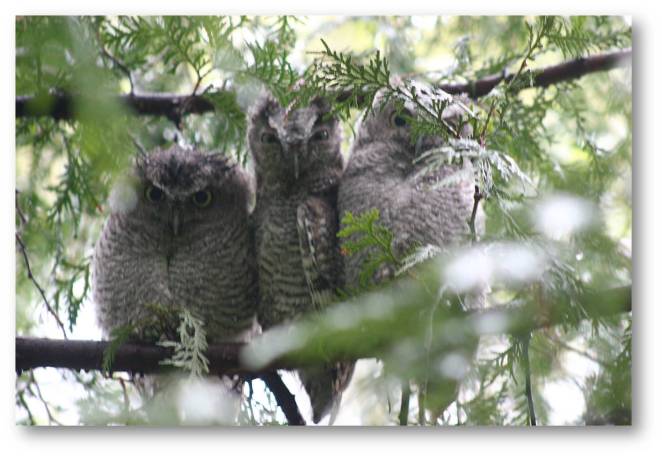 After adding about 200 species of native plants to our urban, land-locked yard, Screech Owls nested in an old tree. Returning most years, the diversity of wildlife attracted by native plants has meant a large increase in local wildlife.

*** Two key programs for gearing you up to contribute are In the Zone Gardens (www.inthezonegardens.ca) and the Landowner Leaders Program (see www.caroliniancanada.ca).