Originally, a pittance was a gift or bequest to a religious community, or a small charitable gift. The word has transformed into meaning a very poor wage or allowance.

Pigeons, if completely white and released at an event, are often considered a gift of heavenly persuasions. If bland-grey and commonly encountered in our cities, however, the Pigeon usually is viewed by people with cheap annoyance.

Are they skyward-flying heavenly Rock Doves, or evil rats with wings? It depends on your experience with these ‘Old World Birds.’ If you’re leaning towards the ‘rats with wings’ side of things, here are a few facts and stories about Columba livia, the Pigeon, that may sway you even to the point of pure love for the common Rock Dove.

Contemplating her species long co-existence and love with humans, a Pigeon reflects on a marble carving in Florence, Italy.

Pigeons, like most of  N.A.’s human population, are non-indigenous ‘settlers’ first introduced to the continent in Nova Scotia in 1606. Originally found in the wild on the cliffs near oceans in Asia, Europe and North Africa, they now populate cities the world over, by the millions.

An statue of a Pigeon in the Vatican, Vatican City, Italy.

Move over Rover? Not quite; dogs are still king, but Pigeons are close. For more than 5,000, Pigeons have lived hand in hand with people, servicing our many needs, creating many leisure opportunities. These birds have saved lives in war, delivered messages, filled hungry bellies, acted as live targets for shooting practice, provided fodder for falconry, and entertained us with their unusual shape, colour, and size, in addition to wowing us with remarkable aerial acrobatics.

Speed. As humans, we are fascinated with speed.  Fastest land mammal? Cheetah – 120 km/h. Fastest bird (and overall animal for that matter)? Peregrine Falcon – 220 km/h in a hunting dive. And…the Pigeon? Guesses? In a straight line flight, it is one of the fastest birds in the world, attaining speeds clocked over 140 km/h, easily out-flying the Peregrine Falcon’s straight line best of 96 km/h.

Inventors of Airmail. Ok, it was slave labour really, as we forced them into the postal service. By capitalizing on their ability to return home, and manipulating where we placed their food, Pigeons carried messages, often traveling several hundred kilometers to do so. This started over 2,000 years ago in Persia, Rome, Greece, and many places in between. Hand written messages of topics ranging from love (letters to far off lovers) to hate (war reconnaissance updates) were attached to the legs of pigeons and, without judgement, dutifully delivered on time and at a low cost. It would be several hundred years before Pigeons organized the first known Airmail Pigeon Workers Union – Local 001. This was a major cooo!

Heroism. Across thousands of years of shared history, countless Pigeons, such as one named ‘Cher Ami’ in WWI, were war heroes, responsible for saving the lives of thousands of soldiers trapped incommunicado, in dire situations. Cher Ami was one in a series of several pigeons released from a desperate battalion caught in a depression, completely surrounded by opposing forces. Equipped with a message written on an onion skin, Cher Ami rose through the bushes only to get shot down instantly. Mustering enough energy and determination, she took off again, in spite of having been hit in her breast, having lost sight in one eye, as well as having a leg dangling from a narrow tendon. In 25 minutes, traveling in this injured state at over 80 km/hr, she returned to division headquarters with a key message. All remaining 194 allied soldiers were safely rescued. Medics saved her life, performing surgery and giving her a wooden leg. She died a decorated hero a year later at age nine.

Cher Ami was a Homing Pigeon in Service in WWI, credited with saving thousands of lives.  This photo is not Cher Ami, but you can Google her to see a photo of her stuffed body in an American Museum.

Squab (what we call pigeon meat). Of course, for all they’ve done for us, we have to eat Pigeons too. Being a Pigeon fancier and vegetarian, I’ve never done this. But I’m not bitter.

Diversity. Similar to the manner we ‘turned’ the wolf into poodles, terriers, Great Danes and oodles of others through captive breeding and artificial selection over thousands of years, hundreds of varying breeds of Pigeon have been created by humans. The photos attest to the incredible array of weird and wonderful.  The Saxon Fairy Swallow Pigeon; the Indian Fantail. Others feature remarkable behaviour such as laser-like guided Homing Pigeons, some breeds that tumble and roll in the air, to others that look like they are going to explode. Professional Pigeon shows are common and taken seriously (by Pigeon People only, of course). 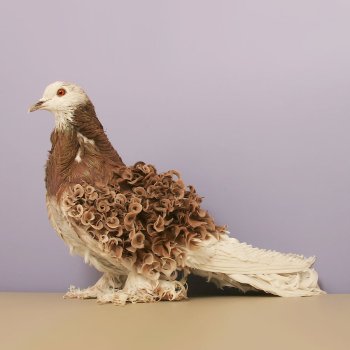 Milk. Aside from mammals, Pigeons are the only other animals to feed their young milk from specialized cells that line their crop (food storage area).

Monogamy.  For the most part, Pigeons mate for life. In cases where partners have died, or birds are forced away from their mates, they will re-couple.

Pigeons and Me. Growing up on a horse farm, I developed the uncanny ability of being thrown off just about every horse I climbed on. Dragged to horse shows by my parents and sisters, one year when I was 9 years old, I stumbled into the small animal section. There, I came across a Pigeon show. I was dazzling. I was captivated. It featured dozens of birds of various breeds. Several ‘Pigeon Fanciers’, usually older men with accents from one European country or another, noticed my curiosity. Within no time, a few of these men had convinced my parents; a few pairs came home with me, effectively drawing me into the passion of the Pigeon. Within a couple of years, I had close to a hundred Pigeons of several breeds. This included Homers, Rollers, Modenas, Pouters, African Owls, Fantails, and many others. Pigeons became my functional ‘video games.’  Almost akin to the modern day kid’s smart phone, I spent hours and hours in the coop and outside in sheer wonder, watching the them fly by and strut their stuff. I paired birds. I helped raise their young. I raced Homers. I lay in the long summer barnyard grass with my friends, watching the Rollers climb high in the sky before going into aerial stalls and the ensuing somersaults, spins and tight rolls. One year, I lost dozens of Pigeons to a hungry, stealthy Mink. I cried and cried some more.

Feeding a young Pigeon out of hand.

Most kids these days are adept in the urban jungle. We now know this can be stale for some aspects of their development, providing not nearly enough stimulation, holding back creativity and confidence. Animal husbandry, similar to getting outside in nature, fills some of these gaps. While we can’t keep chickens in London, ON, a home owner is permitted to have a coop of Pigeons. Hmmm…given my experience raising and learning about Pigeons, I can assure you this would be a gift to many kids; an experience of wonder, responsibility and pure joy.